What Is The #ENDSARS Protest? And How Can You Support The Movement?

WHAT WAS THE SARS UNIT SET UP FOR?

“SARS is one of the 14 units in the Force Criminal Investigation and Intelligence Department which was established to detain, investigate and prosecute people involved in crimes like armed robbery, kidnapping and other forms of crimes.”- Wikipedia

It started out as a faceless, 15-member team that traveled in two unmarked buses, its officers often wearing neither uniforms nor name tags. At first, this anonymity helped them successfully thwart crime. However, as the force began to grow, their unidentifiable nature served as an enabler to reckless behavior.

WHY WAS THE SARS UNIT ASKED TO BE DISBANDED?

The SARS unit has been accused of targeting young people who appear well-dressed, shaking them down for money, and torturing and abusing and even killing those who resist. Amnesty International says it documented more than 82 cases of abuse and extrajudicial killings by SARS officers from January 2017 to this May.

And these are only cases that have made it to the records. There are several alleged unrecorded cases of severe police brutality on Nigerian Youths.  At first, this anonymity helped them successfully thwart crime. However, as the force began to grow, their unidentifiable nature served as an enabler to reckless behavior. The SARS unit has been accused of targeting young people who appear well-dressed, shaking them down for money, and torturing and abusing and even killing those who resist.

There are claims that some youths have been thrown in jail by SARS officials for refusing to concede to their illegal demands. A report states that 1 out of every 5 youths between ages 18-35 has been harassed, extorted by the rogue SARS unit.

WHAT IS THE #ENDSARS PROTEST?

On October 10, 2020, Nigerian Youths decided to take the online protest to the streets. They had had enough of the faux promises to disband SARS and wanted their voices to be heard. The protest kicked off in Lagos and has now spread to several parts of the country.

HOW HAS THE GOVERNMENT RESPONDED TO THIS MENACE?

In 2017, the Federal Government attempted to disband SARS, but to no avail.

In 2019, IGP Mohammed Adamu ordered the immediate “decentralization” of the Special Anti-Robbery Squad.

Did this move work? You guessed right, it didn’t.

WHAT DO THE NIGERIAN YOUTHS WANT?

Here’s is the 5-point demand by Nigerians without which the protest won’t end. 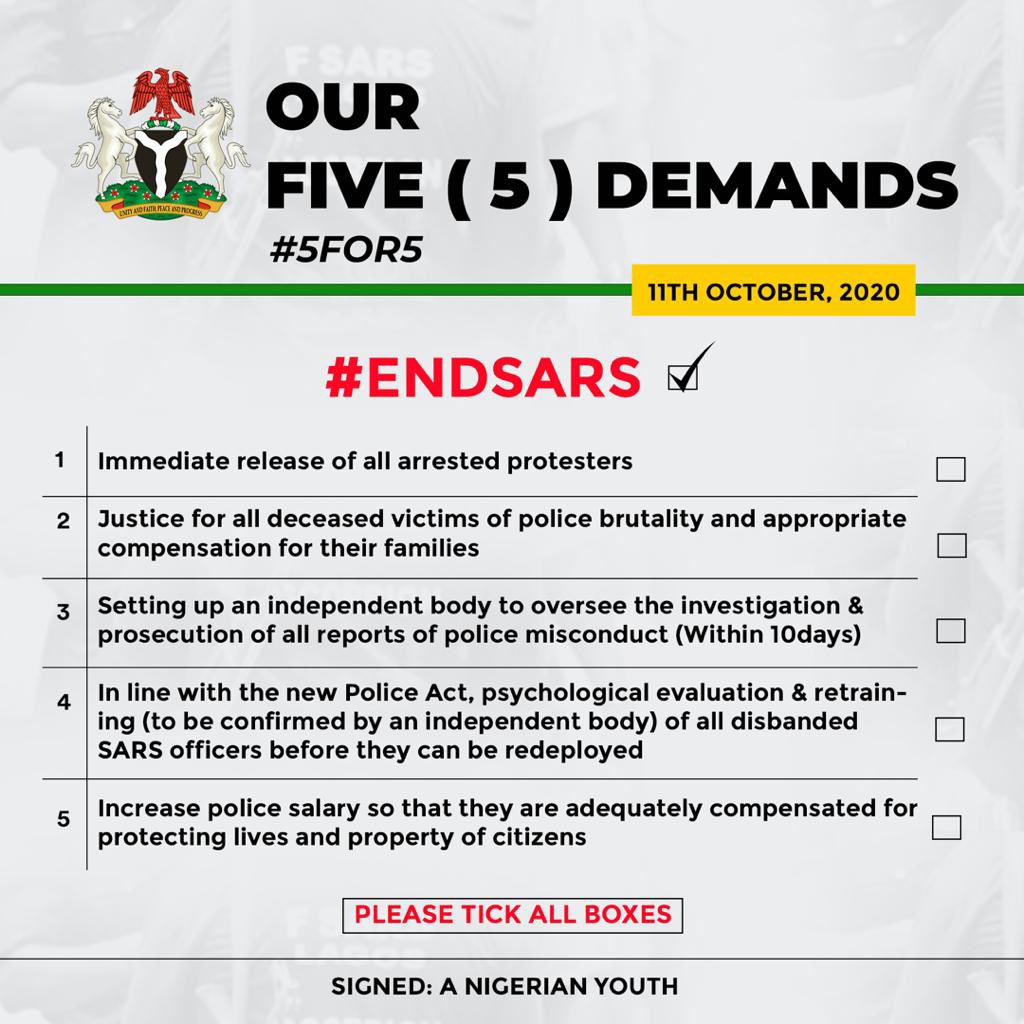 HOW CAN YOU HELP?

Please stay safe and cautious at these times while we fight against this gross injustice.

“SO POWERFUL IS THE LIGHT OF UNITY THAT IT CAN ILLUMINATE THE WHOLE EARTH.” –Baha’ï Writings