Tony Elumelu, Other Powerful Africans Named in "Times 100" List Of Most Influential People

According to the TIMES 100, one of Africa’s foremost Investors, and Philantrophists, Tony Elumelu, has been named as one of the “Most Influential People In The World” for the year 2020.

Other Africans who made it to the list are, Tomi Adeyemi (Writer of Children of Blood and Bone),and Tunji Funso (Chair of Rotary International’s polio-­eradication program in Nigeria.)

Who is Tony Elumelu? 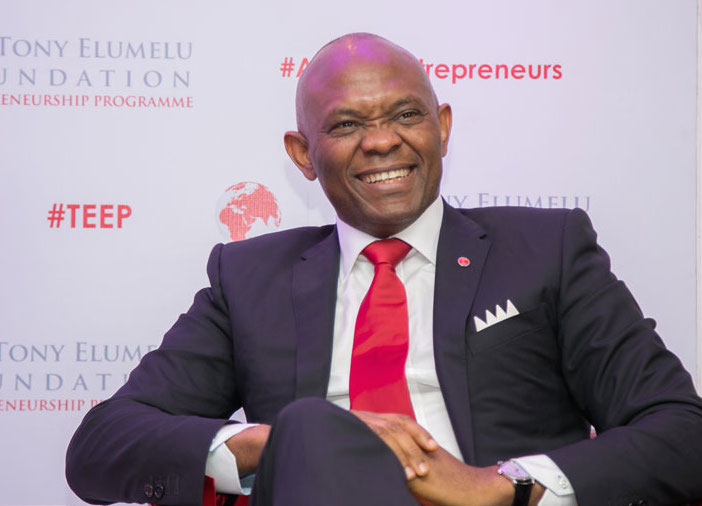 Here is how the “The Tony Elumelu Foundation” describes him:

“Tony Elumelu is the Founder and Chairman of Heirs Holdings, his family owned investment company, committed to improving lives and transforming Africa, through long-term investments in strategic sectors of the African economy, including financial services, hospitality, power, energy, technology and healthcare. He is also the Chairman of pan-African financial services group, the United Bank for Africa (UBA), which operates in 20 countries in Africa, the United Kingdom, France, and is the only African bank with a commercial deposit taking licence in the United States. He also chairs Nigeria’s largest quoted conglomerate, Transcorp,  whose subsidiaries include Transcorp Power, one of the leading generators of electricity in Nigeria and Transcorp Hotels Plc, Nigeria’s foremost hospitality brand.

Mr Elumelu is the most prominent champion of entrepreneurship in Africa. In 2010, he created The Tony Elumelu Foundation (TEF), the philanthropy empowering a new generation of African entrepreneurs, catalysing economic growth, driving poverty eradication and ensuring job creation across all 54 African countries. Since inception, the Foundation has funded just under 10,000 entrepreneurs and created a digital ecosystem of over one million as part of its ten year, US$100m commitment through the TEF Entrepreneurship Programme.  Self-funded, the Foundation is increasingly sharing its unique ability to identify, train, mentor and fund young entrepreneurs across Africa, with institutions such as the UNDP, the ICRC and leading European development agencies.

Heirs Holdings, which serves as a corporate role model for African businesses, and the Tony Elumelu Foundation will both celebrate 10 years of impact in November. Their mission continues to be inspired by Mr Elumelu’s economic philosophy of Africapitalism, which positions the private sector, and most importantly entrepreneurs, as the catalyst for the social and economic development of the continent.”

A little about Tomi Adeyemi

“Tomi Adeyemi is the #1 New York Times-bestselling Nigerian-American author of Children of Blood and Bone. After graduating Harvard University with an honors degree in English literature, she received a fellowship to study West African mythology, religion, and culture in Salvador, Brazil.

When she’s not working on her novels or watching BTS music videos, she can be found blogging and teaching creative writing on her website. She lives in San Diego, California.” (Source: Good Reads)

She made it to the Times 100 List (as recommended by John Boyega) because her Novel “Children of Blood and Bones” has been described an inspiration for younger people. It has won the 2018

Goodreads Choice Awards Best Debut, as well as the 2019 Audie Audiobook of the Year

Dr. Funsho, a cardiologist based in Lagos, Nigeria, is the first Rotary member to receive the honour of “TIMES 100” for the organisation’s work to eradicate polio, having played an essential role in ensuring Africa’s certification as wild polio-free in August of 2020.

The leader of Rotary’s Nigeria National PolioPlus Committee, who doubles as a member of Nigeria’s Presidential Task Force on Polio, has worked tirelessly on various fronts to champion the eradication of polio in Nigeria and Africa in general.

As the leader of Rotary’s Nigeria National PolioPlus Committee, Funsho has worked alongside Rotary members throughout the country to raise awareness about the importance of polio immunization, encouraged governments and public figures to support polio eradication, and served as a vocal leader and advocate for Rotary’s fight to end polio in Africa. (This Day Live)

I’m honoured to be recognised by TIME for my part in ensuring that no child in Africa will ever again be paralysed by wild polio, a disease that once disabled 75,000 African children every single year,” said Dr. Funsho. “Eradicating the wild poliovirus in Africa was a team effort that required cooperation and dedication of governments, partners, Rotary members, hundreds of thousands of health workers, and countless parents who chose to have their children vaccinated against polio,” he added.

We are so proud of Africans who through their good works keep the spotlight shining on Africa. Their achievements are definitely worth celebrating.